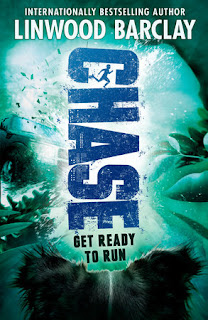 After the death of his parents in an horrific plane explosion, Jeff Conroy is taken in by his seemingly indifferent Aunt Flo.  Even though he is only 12, he toils long days to help run her summer rental cabins.  Because his aunt doesn't like dogs, he was forced to give away his beloved dog.

Life is looking down until he meets Emily, daughter of the owner of a several nearby rental cottages.  Their friendship is in the early stages when Chipper, a run away dog, bounds into their lives.  They soon learn that Chipper is a very special dog, with state-of-the-art computer implants.  The people who created him are most anxious to get him back and will do almost anything to achieve that goal.

It may seem far fetched to have a dog with such skills and intelligence, but in the hands of talented author Linwood Barclay, I had no trouble accepting Chipper and his gifts.  I have always wondered what dogs thing about and what they would say if they could talk with us.  This is a fast paced story that is sure to capture the imagination of middle school readers.  They will be able to identify with Jeff and the troubles he is having adapting to life with his aunt.

The only problem with this book is that it ended to soon.  I'm hanging off the cliff with no idea when the next part of the story will be published.

I received an advanced reader copy of this book from Penguin Random House in exchange for an honest review.

I've quite enjoyed his books for grown-ups, so I'd like to give this one a try too. And I like the idea of the dog's character!