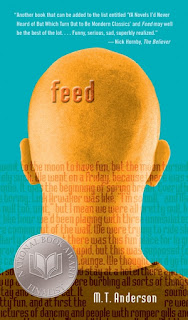 They met during a spring break trip to the moon. It should have been a short romance, but when both of them, along with several friends are infected with a man-made virus, their relationship changes and deepens.

At first, Titus takes this in stride, but then it becomes all too real and he pulls back.  Violet wants to have a meaningful relationship in a world where most people are quite shallow and only concerned with their next purchase that will keep them in the current style.

It is sad to think that there are many who see this reality as our best possible future.  An Internet like feed directly into our brains.  Already we are inundated with advertising and the push to consume even more.  Too often we are willing to let others do the critical thinking for us.  Hopefully this book will serve as a wake-up call to it's readers.

I'll admit, I didn't really like this story at the beginning. The language was difficult to understand and most of the characters were two dimensional.  Lingo and jargon are hard to get a grasp of if you aren't a part of it's community.  But then the story changed, the kids got sick and removed from their feeds.  Then I started to see the real people buried beneath the technology.  By the end of the book I was consumed by their stories.

This is a good cautionary tale.  Should appeal to teen and young adults,

I listened to the unabridged audio book as read by David Aaron Baker.  5 hours 5 minutes