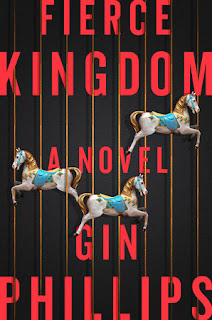 Joan and her four year old son Lincoln have spent a pleasant afternoon at the zoo and are packing up his toys when they hear several sharp bangs, or are they loud pops.  They don't think much about it as they are walking toward the exit.  It is almost closing time and they don't want to be locked in.  As they approach the gate, Joan realizes something is wrong, very wrong.  With Lincoln gathered in her arms, she flees back into the safety of the darkening zoo to escape whatever/whoever is threatening her son.

Thus starts the three hour whirlwind of a story.  Prior to picking up this book, I made sure that my day was clear as I knew that once I started, I would not be able to sleep until I had read to the final pages.  Throughout my day, the pace of the story quickened and my anxiety/exhilaration increased.  Would the two be able to hide and escape detection or was someone hunting them, were there any other survivors.  Questions flew through my mind of what I would do should I be in the same or a similar situation.  Did I have it in me to put my life at risk to save my child.

The concept of this story is chilling; it's a parent's worst nightmare.  It seemed quite realistic that so many thoughts and experiences passed through Joan's mind as she struggled to stay alert to the risks and to plan possible routes of escape.  The only trouble I had with this book is that I didn't make a connection with Joan.  As a mother, I felt her pain, but I didn't really care about her; she seemed somewhat standoffish.  There was nothing about her for me to latch onto, such as a shared interest or goal.  She was a blank slate, the only thing we knew about her at the beginning was that she was a mother.

Even though I didn't care for Joan, I was riding an adrenalin high by the final pages.  My heart rate was elevated, my flight or fight impulse was raging and I wanted to hug my children and hid them away somewhere safe.  If you are looking for a thrilling read that will cause your blood to race, this is the book.

In the present context a nightmare for all.