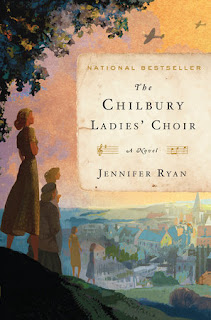 World War II has reached England and the small town of Chilbury on it's east coast hasn't escaped it's ravages.  Most of the able bodied men have enlisted, leaving the women to fill their traditional roles.  It comes as a shock to some of the women in Chilbury when the vicar announces that due to the lack of men, the esteemed village choir will close.

Primrose Trent, the new music tutor, soon after re-opens the choir to the mixed reactions of the women.  Some of them can't imagine a choir without male voices and other realize that they can't stop living just because the men have left to defend their freedoms and very lives.

I enjoyed the interplay of the characters, particularly how being a small town and in an extra-ordinary  situation helped batter down the barrier of the social classes.  I could easily imagine stuffy Mrs. B. looking down her nose at Prim and predicting doom for the new choir.  As much as there were many characters to love, there were also those that you loved to hate, mainly Edwina Paltry, the mid-wife, and the nasty Brigadier Winthrop (why wasn't he doing anything constructive for the war).  Many of the other women I would have been most at home with for an afternoon of tea and conversation.

The mixing of fact and fiction makes for an easy to learn some British war history.  An all women's choir was a new thing and the women involved gained strength from participating.  After lives spent being in the shadows of the men, women were finally given the opportunity to show that they were capable of a great many tasks previously thought above them.

At first, I tried listening to the audio book and found I didn't like it at all. Even though there were different voice actors, all the characters sounded the same.  I thought they were all 40 years old, and they all seemed to be putting on these pretentious, snotty upper class accents.  The effect of the letters and diary entries was totally lost by not seeing them in writing.   I was going to give up the book entirely when I spoke with a co-worker who read the paper version and loved it.  She encouraged me to give it another try.   I'm glad she did, the paper version was wonderful.  I was better able to enjoy the format of the correspondence and get a true image of the characters particularly fourteen year old Kitty and ten year old Czech evacuee Silvie, both of whom I had thought were middle age ladies on the audio.

This is a well told story that had me cheering for the successes of the women and mourning with them at their losses. This is a wonderful debut novel by author Jennifer Ryan.  I look forward to her future works.

A book I tried very hard to track down and failed! thanks for this review. It sounds a delightful read.

I enjoyed this one too. Cheers from Carole's Chatter