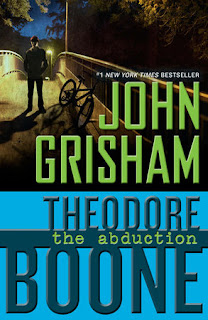 Theodore Boone plans to be a lawyer when he grows up.  Though he is still in middle school, he is already studying the ins and outs of the legal system and helping his classmates with their troubles.

April, one of his close friends, has been abducted , and Theo is pulling in favours and working his connections to find her before it's too late.

I loved this story.  It was fast paced and full of the type of action that middle graders can relate to.  I particularly enjoyed how Theo smartly used the internet to help carry out his investigation.  Theo has a methodical approach that works well for him.

This is a great book for kids who like to solve mysteries or perhaps who plan to become lawyers themselves.

I listened to the audio book as read by Richard Thomas.  4 hours unabridged.  Mr. Thomas is an excellent choice for reader.  His calm, level voice lends an air of realism to this legal story and reflects Theo's desire to become a respected, unflappable lawyer.

Not read a Grisham for years. Thanks for the review.