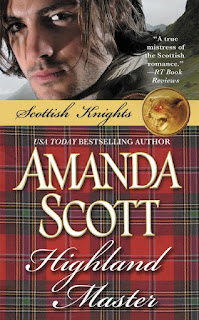 I think I've mentioned at least a few times previously that I like a man in a kilt.  Books with men in kilts work as well.  That led me to highland romances long ago.  Every now and then, I need a highlander fix, this week was one of those times.

Lady Catriona Mackintosh is used to having her way and tends to act on impulse.  When she finds a wounded man near the river, she immediately bends to help him, heedless of her safety.  She doesn't know it at the time, but he is a member of a clan that hers has been feuding with for far too long.

Sir Finlagh Cameron is on the way to find the head of the Mackintosh clan when a wayward arrow fells him.  Luckily, Catriona finds him and leads him to safety.

This begins our tale of the two unlikely romantic figures.  While I enjoyed the tale of how the two founded and worked out their romance, I found that the politics of the time cast too large of a shadow over their story.  It was had to follow who was who with characters having common names, plus official titles and often nicknames as well.  I was a third of the way through the book before I realized who most the people other than Cat and Fin were. This took away from my enjoyment of their tale.

I found that Cat was too head strong.  Not that that is not a good trait to have, but that she ignored warnings and guidance almost all the time.  Didn't seem realistic to me and it got annoying at times.

On the whole and enjoyable story.  This is the first book author Amanda Scott's  Highland Knights series.