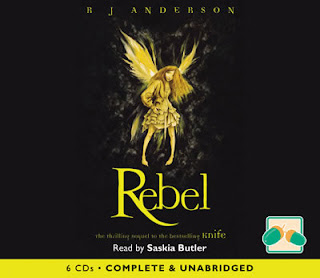 The threat to the oak tree where the faery live continues.  As the queen sickens, her magic fails more each day and the tree itself is failing.  They need help and only other faeries can bring what they need.

Young Linden is the only one suited to such a momentous task, but she will need help  She turns to Timothy, a visitor to the family who own the house and lands where the oak is growing.  At first he is reluctant to help, but the more he learns about the faery and their plight, the more he is willing to help.

While I enjoyed this story, I didn't warm to Timothy.  He was too sullen and not open to the grand adventure he was living.  True to their youth, the two stride out into the world with few resources and plans.  Their friendship has it ups and downs thought they do manage to put aside their differences in order to work together and achieve their goal.

This story has a more gritty feel than Knife, which seemed more enchanted.  Linden doesn't have the leisure to explore the human world, but rather she quickly becomes mired in the nastiness that has almost overwhelmed her own world.  This is a good second book in the series.  It answers some lingering questions, poses more that are yet to be resolved.  The tale continues in book 3, Arrow.   This book was published in the United States under the title Wayfarer.

I listened to the unabridged audio book as read by Saskia Butler.  6 hours 33 minutes.