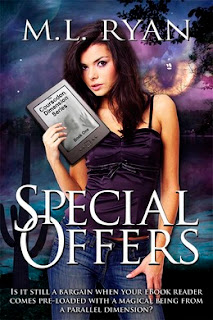 Who knew ebook readers could offer such danger and adventure.  After being invaded by a being from a another dimension via her new Kindle, Hailey Parrish found her life in a turmoil and her heart racing.

Sebastian was a bounty hunter and was killed on the job, more or less.  His protege came looking for him and found Hailey.  Sparks flew, but they had to first resolve Sebastian's dilemma before they could carry on with their relationship.

It was like eating popcorn, I couldn't stop reading this fun and quirky store.  Is chinchilla milking and cheese making really a thing?

The only part of the story I didn't enjoy was when Alex reveals about being an alien.  It didn't fit in with the rest of the writing style at all.  It was as though the author had no idea how to incorporate it in to the story so she just blurted it out and then moved on.  It took me a while to get over that interruption to the flow of the tale, but by the end of the book I was already eager to learn more of Hailey's adventures with the Coursodons.

ok, this sounds like fun...just my kind of silliness.

Just ordered it! I got it through my Kindle Unlimited too.