The Reason You're Alive by Matthew Quick 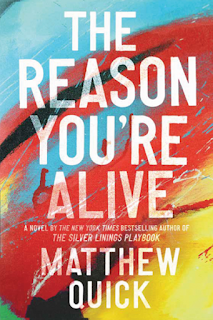 As I was reading the opening chapters of this book, I thought I'd made a mistake and selected the wrong book.  I couldn't  identify with David Granger, the main character and wasn't comfortable with his colourful language.  I had pondered abandoning the book but recalling how much I had enjoyed one of his previous novels, I decided to read at least a few more chapters.

With each passing chapter, David's abrasive cover was chipped away and I began to meet the proud Vietnam vet who thrived below.  I was soon hanging on every word of this man I had thought I couldn't like.  There was so much more to him than first appearances could convey.  His frank way of talking and his colourful choice of words combined for a refreshing character.

By the time I reached the mid-point of the book, I could not put it down.  I had to learn how he would resolve his greatest regret.  At time, I did have to stop reading to wipe away copious tears. Some how, a man I didn't think I could understand made me care about him.

An excellent story.  It brought me face to face with a time, and soldiers I had only seen portrayed in movies.

Heather, thanks for this review - this book is in my line up to read and I will now at least try to give it a go. Cheers from Carole's Chatter