The Mosaic by Nina Berkhout 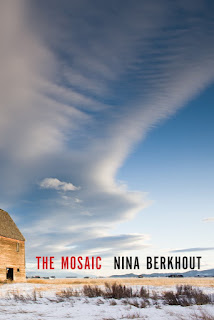 Twyla has her life planned, knows what she wants and the guy she is going to do it all with.  until she meets Gabriel, and injured war veteran.  Her community service stint is supposed to be a one of , no strings attached.  At first she dislikes Gabriel, but over time she starts to meet the real man behind the solitary, don't need any help image he presents. This community service arrangement brings out the worst in her seemingly perfect boyfriend.

Twyla has to confront a lot of truths she is now learning.  She has to determine who she truly wants to be as opposed to who others expect or are pressuring her to be.  While Twyla is learning about becoming an adult, Gabriel begins to confront the ghosts that have haunted him since his earlier deployments.  I was fascinated to read about the ammunition mosaic that he is creating and how it was helping him to cope.

This was a thought provoking read. It wasn't light and fluffy, but more a gritty story that reflects true to life issues that teens have to deal with.   I had me thinking about gossip and heresay as opposed to the underlying truth of situations.  Twyla learned that you can't take everything at surface value especially when people and their emotions are involved.

To learn more about art made with ammunition, visit the website of artist John Ton
A google search for ammunition art found many more examples.

I received an advance reader copy of this book from Indigo Books & Music Inc., in exchange for an honest review,