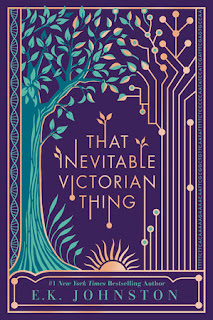 I could not put this book down.  It is a totally captivating re-imagining of the modern world.

What if the influence of the British Empire had not waned, and if Victorian morality and courtly practises still held.  Author E. K. Johnston imagined that Queen Victoria devised a plan to weld the Empire together through strategic marriages of her children and grand children to nobility throughout her kingdom, not to that of neighbouring European countries.  Generations later, the plan has proved successful and the Empire thrives with a very mixed races population.

The current crown princess Victoria-Margaret is about to come of age and assume her duties.  Before undertaking those responsibilities, she wants one summer to live among and with her future subjects.  She travels incognito to Toronto to stay with her glamorous cousin Elizabeth.  She soon meets her family  friend Helena, to whom she is instantly attracted and they become the best of friends. This sets in motion a chain of events that they could never have imagined.

I loved everything about this story. The characters were young, just venturing into adulthood.  They thought they knew what they wanted, but when they walked through that doorway, they realized that there was far more to consider than their younger selves had imagined.

I could not imagine having paid staff in my house such as a butler and an attendant to help me dress, though a cook would be most amazing.  I suppose if I had been born into that type of world, it would be common place, but to read about it and try imagining myself there, I don't get very far.    Ms. Johnston did a great job of re-creating the modern world as part of the Victorian era.  It felt authentic to novels I've read that were written in that time period.

I highly recommend this book.

I am lazy by nature so can envisage all of them! all will be welcome.