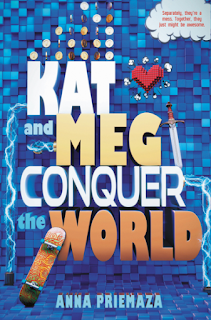 Moving provinces and starting at a new high school is almost more than Kat can handle.  Add on top of that her barely controlled anxiety issue and it's amazing that she even manages to get to school each morning.

When the two term science project is announced, she has no idea who to team up with until Meg introduces herself.  Unknown to the studious Kat, Meg has a major issue, ADHD to deal with herself.  There is one thing that draws the two together, their love of  Lumber Legs.  He's a You Tube sensation who more often than not features epic fails of himself playing the very popular Legend of the Stone computer game.

I enjoyed the story of the girls getting to know each other even as there were trying so hard to hide their personal issues.  They were both trying to hide what they viewed at their own flaws, but they loved watching Legs share all of his.  The two came across as real teens.  Their discussions about everyday teen issues made it feel as though I was over hearing my daughter and friends.

This is the type of interaction that goes on in high schools across the country and has for generations.  The gaming aspect keeps it modern and relevant to today's teens.  This is a well told take that made me care about the outcomes for both Kat and Meg.

I received an advance reader ecopy of this book from Indigo Books & Music Inc., in exchange for an honest review.

Hmm! Interesting but then I'm always interested in books that feature characters with ADHD and the likes.

I also like that it is kept relevant thanks to the gaming aspect.