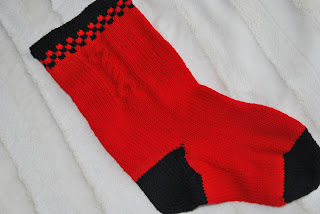 Generally speaking, I am not one for using the same pattern again and again.  That being said, there are a very few that find their way to my attention repeatedly.  The fittens that I knit all year long and the Christmas stocking pattern that I have used at least 6 times.  I might have mail ordered it or purchased it at a craft show about twenty-five years ago.   I haven't found a new one that I like better, so I keep using the basic pattern and adapt it as desired.  This year I added a stylised barbell.  It's for my son's house mate who is an accomplished body builder. 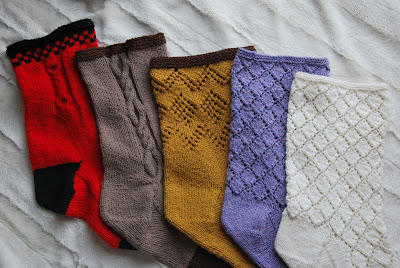 Shown are the versions of the stocking that are at my house as of today.  I have already talked about the red one on the left.  On the extreme right , the cream coloured one is the original version.  very feminine.  I believe it is stitched in a wool blend.  I've probably used it for over 20 years and it still looks wonderful.  The mauve one I made for my sister eight or so years ago.  It is used when she is visiting us for Christmas.  She is not allowed to take it home with her.  The gold coloured one belongs to my daughter.  I didn't have quite enough wool, so added brown to the top and toe as I did with her brother's, the lighter brown stocking.  The mauve, gold and brown wools are all from Briggs and Little, a Canadian east coast wool.

Still missing and yet to be stitched some year, is a new stocking for hubby.  He is still using the gigantic stocking that his mother made him when he was young.  There is a photo somewhere of him as a toddler sitting inside the stocking.

Still open from 2012, is the linky for Christmas Tree Skirts

and from 2014 the linky for The Great Advent Calendar Hunt


On to other major news, Needlework Tuesday is moving.  In January it will be replaced with Stitch'N Time which will feature on Mondays.  Now that I am working in book retail, I learned that new books are released on Tuesdays.  Direct conflict with this column so I decided it was time for a change.  I hope that you will join me on Monday, January 8, 2018 for my first Stitch'N Time post. 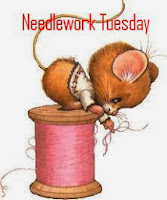 Needlework Tuesday is a regular weekly post where I share the progress of my various needlework projects over the past week. I enjoy the encouragement that I receive from my readers and in return visit their blogs and cheer them on with theirs. You are welcome to grab the cute little mouse and create your own Needlework Tuesday post. Leave a comment with a link and I'll be sure to visit with you. Mister Linky is waiting below for a link to your current needlework post 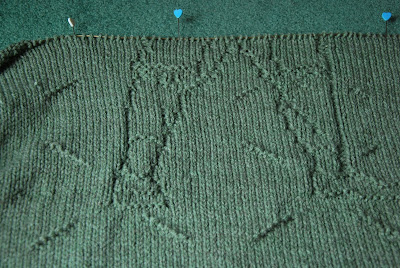 I have to admit that I am having a lot of fun knitting this afghan.  Each row that I stitch reveals a bit more of the design.  I constantly am telling myself, just one more row, okay, maybe two more.

Unfortunately, I have to put this project on a short hold to rush through another. 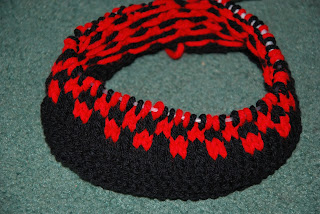 Son also asked for a stocking for his room mate.  Since they decided on a black and white decorating theme, I wanted to follow through with that.  I am using a basic pattern that I've knit several times before, though I will change the design on the leg to reflect the recipient.  This will knit up quickly in the worsted weight yarn I'm using.

Whew, this is that count down time for gift stitching.  The blanket doesn't have a set deadline since the baby is already arrived.  Of course the stocking needs to be finished ASAP.  Anything else that I have started will be finished when ever.  I learned not to sweat those projects that don't get finished according to a self imposed schedule.  I no longer  stay up till all hours stitching, the miserable feeling the next day isn't worth it.  Recipients of hand made items are willing to wait  a wee bit longer and if they aren't then I don't stitch for them again.  As long as I remember that I stitch for personal fun and enjoyment, then it remains something that brings me joy which is what I want.  I hope that you stay relaxed and let your stitching bring you joy even if you are working toward a deadline.

Needlework Tuesday is a regular weekly post where I share the progress of my various needlework projects over the past week. I enjoy the encouragement that I receive from my readers and in return visit their blogs and cheer them on with theirs. You are welcome to grab the cute little mouse and create your own Needlework Tuesday post. Leave a comment with a link and I'll be sure to visit with you.
Mister Linky is waiting below for a link to your current needlework post