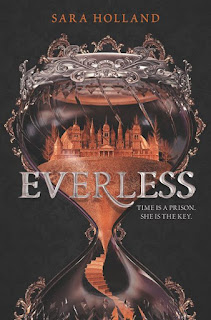 Jules Ember is just an ordinary 17 year old girl in her tiny village.  She helps her father in any way to support the two of them.  But unknown to anyone else, Jules has a unique and scary talent, she can stop time.  She can freeze the world around her, though she doesn't know how or why.  As it turns out, there are more secrets surrounding her.  The only way to figure them out is to infiltrate the Gerling estate where she once lived with her father as a child before they were run out of town.

Everless is an old kingdom ruled by a queen said to be over 500 years old.  Not an impossible feat when you consider that blood is equivalent to time.  A person can sell years of their life by extracting their blood and using alchemy to turn it into coin.

Jude senses that she is connected with the Gerlings and their time wealth.  She hopes she can find out how before they capture and punish her.

This is a brilliantly written debut novel by author Sara Holland.  She has created a country where alchemy affects the lives of all  I was pulled into the story and Jule's life from the first pages.  I was so captivated by her plight that I actually felt as though I was creeping along the darkened servants passages with her.  I also questioned with her, how the Gerlings could have so many riches, while the common fold were so poor that they would even sell the last of their lives so that they could care for their families. The descriptions of the estate and the towns were so realistic I could almost see the snow covered streets with the smoke curling from the chimneys.

There is a great cast of characters.  From Jules fellow servants, the towns people, to the royals, they all came to life for me and I quickly liked may of them.

This book would not let me go.  I stayed up late reading and found myself early up the next morning to continue.  My only regret in finishing is that I now have to wait for book to to read further about Jules adventures in her quest to learn about her mysterious past.

I received an advanced reader copy of this book from Indigo Books & Music in exchange for an honest review.