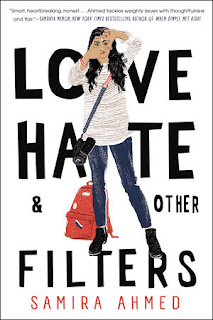 Maya is in her final year of high school in a small American town.  She is quiet and often hides behind her video camera which she employees to make documentaries.  She'd love to attend NYU for film studies though her parents expect her to follow their wishes of meeting a nice Indian boy while she attends a near by law school.  Maya is torn between pleasing her parents and following her heart  All these plans are thrown in turmoil when a response to a serious incident elsewhere in the country unleashes islamaphobic attacks upon the family.

Maya is your typical girl next door that you'd want your child to be friends with.  She is kind and sensitive to others, smart and studies hard.  She also happens to be Indian and Muslim.  These shouldn't and don't matter to most people, but there are some who hold these differences against her.  Just because a person is different than you, it doesn't automatically diminish that person nor does it make them bad.

At an age where so many teens are struggling with what they want to do with their future, Maya has a very clear view.  She wants to study film so she can make and direct documentary films.  She also wants to be able to tell her parents that she wants a love match and not an arranged marriage.  She wants to be given the freedom to make her own choices.

I love this book.  It spoke to me on so many levels.  As a parent, Maya is a daughter that I would be pleased to call my own. She was brought up in a warm and loving family by attentive parents.  She is intelligent and well prepared to face the adult world.  When the world crashes into her life and her family, her response is realistic.  She is concerned for the well being of those who were directly impacted by the incident before she questions how this might reflect back on the Muslim communities across the United States.

Author Samira Ahmed has shone a light on an ugly incident of the type that happens far too often in our so called 'civilized communities'.  She helps to call attention to racial and religious bigotry.  Such hatred has no place in this world.  All it does is create damage.  Education is the best weapon against such ignorant actions.  This book needs to be widely read.  It would be a good starting place for class room discussions about combating racism.  This is a strong debut novel by Ms. Ahmed and I eagerly await her next novel.