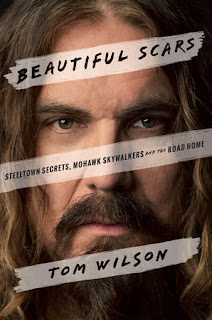 Adopted as a baby, Tom Wilson had asked his mother Bunny if he was adopted, but she never answered.  At the age of fifty-three the truth was finally revealed to him, yet it took him three more years to confirm with his birth mother.

After living an emotionally spartan life with his adoptive parents, the revelations of his birth mother opened up to him a rich and inclusive heritage in the Mohawk community.

I loved this book and Tom Wilson.  I knew nothing about him before I started reading. I was attracted to the story because he had been raised white and only found out as a middle age adult that he is Mohawk.  I enjoy reading books by Indigenous authors,  His re-telling of his life is an easy read, though not always comfortable.  It comes across as the type of conversation you might have sitting around a kitchen table late at night drinking many times refilled cups of herbal tea.

Tom is a down to earth kind of guy.  He is not your glitz and glamour rock star, but the un-assuming neighbour who wants to take care of his family and make music along the way. His humble beginnings are something that most readers will identify with and make you want to see him succeed in his struggles.

If you read only one biography or one indigenous book this year, I highly recommend Beautiful Scars.