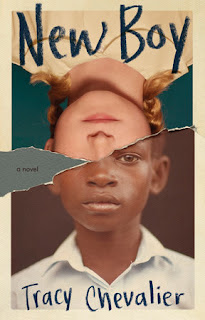 Ian is an unhappy, controlling youth who can't stand for others to be happy or to appear to be one up on him.  He sets out to destroy the budding relationship between Osei and Dee.  This sets in motion a train wreck that can't be stopped.

Osei is the new boy in grade six.  As the son of a diplomat, he is used to moving and starting over.  He starts the morning thinking it will be like his many other first days.  He couldn't have been more wrong.

Dee, the golden haired school darling is immediately attracted to him.  She likes that he is unusual and particularly likes his dark skin.

Watching this happen is Ian, the class bully/bad boy.  He can't stand by and let this new relationship happen, nor can he let that black boy become popular.

Grade six should be fun and games.  It shouldn't be subject to one mis-guided child's manipulations.  I like the characters of Osei and Dee.  They had the potential of forming an honest friendship.  The character of Ian is so well developed that I could imagine the entire school falling prey to his manipulations.  He made evident weaknesses in the teachers and management of the school and even magnified them to his own benefit and Osei's detriment.

I am left wondering what the various participants in this tragedy could have done to change the outcome.  Perhaps one less secret kept, and more openness, or was it bound to happen once set in motion.  Either way, it is a haunting tale.

New Boy is a modern retelling of William Shakespeare's Othello, part of the Hogarth Shakespeare series.  Note: you don't have to have read Othello to understand this book.  This is not a childrens book even though the characters are young.

I received and an advanced reader copy of this book from Indigo Books & Music Inc., in exchange for an honest review.

A new Chevalier for me. Thanks for the review.

I am so looking forward to reading this - I have enjoyed all her books, so well researched. xx