The Journey of Little Charlie by Christopher Paul Curtis 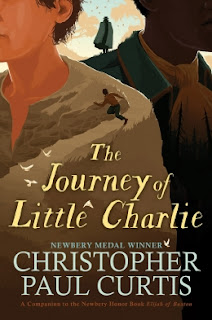 Little Charlie was anything but little.  At twelve years old, he stood well over six feet tall and weighed as much as a grown man.  This served him well when working in the fields with his share cropper parents.

After his father's untimely death, Charlie reluctantly agrees to go with the overseer at the neighbouring farm to retrieve some escaped slaves who were now living in Detroit.  Little Charlie could never have imagined the profound impact that this journey would have on his life.

Author Christopher Paul Curtis has spun a tale that could have been pulled straight from the history books.  Set at a time when the United States was still divided on slave ownership, Little Charlie quickly begins to question many of the lies he had believed about coloured people.  The biggest revelations come when he has a conversation with Sylvanus Demarest, the young black man that he and the overseer are attempting to lure back to Detroit.

This is a well written and researched story that illustrates some of the horrors of the slave trade.  While there is yet much to be atoned for, this book is a welcome addition to the existing narratives I've read previously in my quest to learn and understand more about the events of that complex time.