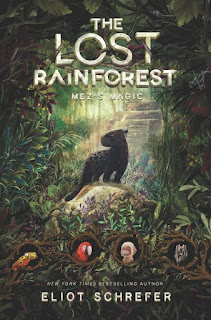 Wonderful story with adorable characters that readers are going to fall in love with.

There are day animals and there are night animals.  No one would ever dare venture outside at the wrong hours, it's just not done.  Mez is a black panther, a night walker.  As his first birthday approaches, he finds himself awake and alert during the daytime hour.  Even though he knows it is wrong and that he could be banished from his family, he decides to go outside during the day.  It is then  that he meets another shadowwalker (one who fins it natural to go outside at the wrong hours) and learns of an ancient enemy that is awakening.  only the shadowwalkers can save the animals of the rain forest from this dark and dangerous power.

I fell in love with this story and it' characters from the very first pages.  Author Eliot Schrefer managed to combine the cute cuddly appeal of young animals with human like personas and make it very believable.  I could easily imagine Mez meeting up with Rumi the tree frog, and them becoming friends and companions.

From a parent point of view, there are lots of good things contained in this book.  Mez's twin sister Chumba has a birth defect which in the real would would have caused her to have been rejected by her family.  Instead, Mez has become herfierce protector.

Mez meets a wide variety of animals during this adventure.  Most would naturally be either his foe or food.  Though he is uncomfortable and suspicious of many of them at first, with time he learns to accept most of them and becomes the best of friends with several.

Each book in this series will be told from the point of view of a different animal.

I received and advanced reader copy of this book from Harper Collins Canada in exchange for an honest review.