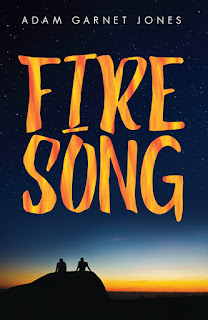 Shane is torn between the person he is on the inside and the person he feels he needs to be on the outside.  In secret, he loves his boyfriend David and how close and understanding they are of each other and their needs.  On the outside, he is attentive to his girl friend Tara and goes through the motions expected of a dating couple.  At the same time he is struggling to accept the recent suicide of his younger sister Destiny and how it has devastated their mom.  He has been relying on Evie, a tribal elder, to help keep his mom at all functioning and yet he keeps hiding his relationship with her grandson.  A gay male on the rez is far from being an accepted thing.

Attending a university far from the rez is Shane's dream.  He figures it will be the only way for him to have a future with David.  Of course, it's far more complicated than he can cope with at that time.

I thought that this was going to be a nice romance between two young men on a rez, but it turned out to be much more.  First, Shane had to deal with his feelings of his mom letting him down during the toughest time of his life when he really needed her guidance.  The time had arrived when he had to address and fully embrace his sexual nature.  This wasn't easy to do on a reserve where male gay relationships were greeted with hostility.  What it brought to light for me was the politics that exist between the various tribes.  In my mind, I had an image of the different tribes working closely together for the benefit of all indigenous peoples.  I was naive in this respect and should have realized that each tribe/reserve is akin to an individual town with respect to bylaws and budgets.

Author Adam Garnet Jones really made me think and question what I thought were truths and any biases I held.  This would be an excellent study novel in high school classes.   Parents and teachers should be sure to check the study guide for this book at Annick Press.


I received an advanced reader copy of this book from Indigo Books & Music in exchange for an honest review.