Hooked on a Phoenix by Ashlyn Chase 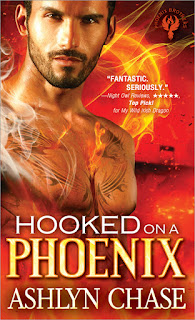 Did you read the Harry Potter books when they were first release.  If so you might recall that Professor Dumbledore has a phoenix as a pet(or is he more of a friend/familiar).  Also, that bird gave one feather, part of which is embedded in Harry's wand.  This is partly what prompted me to read this book, and also because I haven't come across a phoenix paranormal book previously.

Parker Carlisle is about to be stationed overseas when he asks his best friend, Gabe Fierro, to keep a brotherly eye on his younger sister Misty.  Gabe doesn't really want to do this, but how can he refuse his friend.  It's only Misty, the little sister that he hasn't seen in years.  It shouldn't be any trouble.   When he does see her sparks fly, little Misty has grown into a beautiful and appealing woman.  Gabe quickly realizes that it's going to be harder than he imagined to 'just' keep an eye out for her.

I really enjoyed this story.  It was fun and romantic.  I like the way that Misty turned the tables on a traditional romance.  The side line jealousy added some good plot twists that I wasn't expecting.


Once the story got going and I learned more about the phoenix shifting, I had no problems believing it.  It fit right in with the family career choice of fire fighting.  I absolutely love Gabe's mom.  She is the loving but no nonsense kind of mom that could easily handle a bunch of shifter males.  I could imagine her having a positive influence on Misty if her and Gabe's story were to continue.  This book is listed as the first book in a series, so I am hoping that future books will share the stories of his brothers and their partners.  Some of Gabe's brothers are introduced in Ms. Chase's earlier series Boston Dragons.


I received an advanced reader copy of this book from Sourcebooks Inc., in exchange for an honest review.