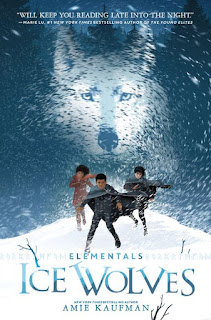 Twins Anders and Rayne have always been close, but more so after they were orphaned at the age of six.  Their bond is challenged when it is revealed that Rayne is a dragon elemental and she must flee the city which happens to be a wolf stronghold.  On that same day, Anders is disturbed to find himself transformed into a wolf, a sworn enemy of the dragons.  This leads him to question everything he thought he knew about his sister, even whether she actually is his sister.

While living on the streets, the two had formed a loose bond with some of the other street kids, but never became close enough to be considered friends.  For the first time he can remember, Anders has made friends with some of his classmates at the wolf academy.. He is closest to Lisabet the first young wolf to befriend him.   He questions whether he can trust her with Rayne`s  secret.  He is desperate to rescue her from the dangerous dragons, but can`t accomplish such a huge task without help. Can he trust Lisabet.

I love this book.  It is full of magical devices, dragons and wolves.  Wolves as young as twelve are entrusted with the safety of the community.  At the same time they are treated as school children who are expected to attend classes and study.  This is much at the target readers of this book; they think they are old enough to be considered adults but in the eyes of their parents they are still young children.

This adventure filled book should appeal to a wide range of middle school readers.  In some ways it reminded me of the first Harry Potter book with the students off to boarding school to lean how to deal with their new found talent.  The contrast of the dragons and wolves makes for interesting encounters.