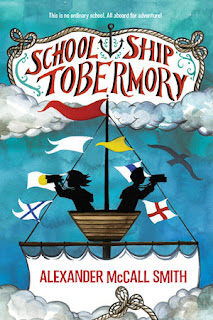 A fun, high seas adventure for the land lubber or middle school reader.

Ben and Fee MacTavish have led an unusual life with their marine scientist parents.  Spending time with them means travelling around in their submarine for weeks at a time.  When it is decided that they will attend boarding school, they enrol at the Tobermory, a huge sailing ship school.  Once on board, they meet students from around the world.

Within days of the start of the term a number of the students are asked to work as extras for a movie being filmed on another ship.  After a few days of filming, Ben realizes that something is not right and he becomes suspicious about the film crew.  Soon the students are caught up in an investigation that takes them far beyond their regular lessons.

This is a well told story that kept me eagerly turning pages.  Not only did I get to know an interesting group of students, but I finally learned the difference between port and starboard.  I could totally imagine enrolling in a school such as this.  It would be a dream come true.  This would be the ultimate escape from the classroom, even if the classroom came with you.

I particularly like that the students come from a wide variety of backgrounds.  Not only do they have to get along in the classroom, but their co-operation is fundamental in the proper running of the ship.  This book should have wide appeal to middle school readers.

Readers of this book might also enjoy: Max Tilt: Fire the Depths by  Peter Lerangis

#IndigoEmployee
Posted by Heather at 19:01

Yet to find a book, let alone a series, by this author that I really like/would like to continue with, this may well prove to be the one. Thanks Heather.