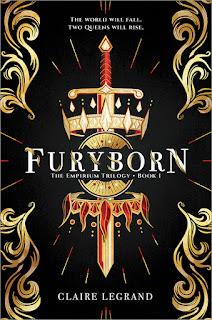 Rielle has a huge secret, that with the help of her father, she has tried to keep hidden.  When Prince Audric's life is threatened, she'll do anything to save the man she loves, even reveal her secret.

A thousand years later, Eliana has her own secret.  One that is to her advantage considering she works as an assassin for hire.  Eliana only knows of Rielle from the stories/legends her young brother Remy collects.  Mostly she dismisses them as one would dismiss fairy tales.  When a job goes wrong and she is forced to switch alliances, Eliana finds herself reconsidering the validity of these tales.

This story spans a thousand years and is alternately told from Rielle's and Eliana's perspective.  Other than their unusual powers, there appears to be little to link the two women.  One a queen and the other a paid assassin, what could they have in common other  than a love for their country.

Unfortunately, this book didn't work for me.  I couldn't identify with either young woman.  They remained strangers to me.  I didn't feel as though I had learned any of the intimate things that a friend or confident would know.  I didn't really care about either of them.  I struggled to finish the final chapters even though they were exciting and contained dramatic plot developments.

spoiler:  the biggest detractor of the book was the inclusion of angels.  They are a type of character I don't enjoy and prefer not to read about.  If the author had included some other race of being it would have increased my enjoyment.

I received an advance reader copy of this book from Indigo Books & Music Inc., in exchange for an honest review.

Giving that it spans a thousand years, the story alternating between two characters I suspect this wouldn't work for me either. A shame really as I had high hopes looking at the cover.