The Astonishing Color of After by Emily X R. Pan 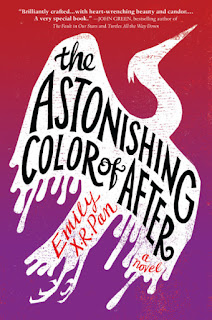 Leigh is just seventeen when her mother kills herself.  She takes it very hard and tries to understand why she did it.  It also leaves so very many questions about her mother's past un-answered.

Soon after her mother's death, a large red bird appears and speaks to Leigh.  She is convinced that her mother has become that bird.  At the seeming urges of the bird, Leigh and her father travel to Taiwan to meet her maternal grand parents.  She hopes that while there she can find the bird and unravel her mother's secrets.

While I did enjoy following Leigh on her quest, I found that the first  two thirds of the book were somewhat lethargic.  It must have been similar to how her mother felt during her depressed times.  After that point, the pace of the story picked up and became more clear.  I couldn't put the book down for the final third.

Leigh is an interesting teen.  She associates colour with all emotions and events.  It isn't made clear whether this is a medical condition called synesthesia or that she is further expressing her artistic flair.  It does enhance the story by considering the events as particular colours.

We also meet Axel, Leigh's long time BFF.  The day they crossed the friend line and kissed is the same day that her mother died.  Leigh has to deal with the guilt she feels over choosing to spend time with Axel instead of caring for her mother.

Other than the events surrounding the magical bird, much of what Leigh, and Axel by extension, have to deal with is realistic.  Teens don't live in a bubble that isolates them from life's pressures.  They have romance angst, home life dynamics as well as their futures to consider.  If it takes a little magic to deal with all this , then I salute author Emily X. R. Pan for doing it so well.

I am not such a fan of the magic genre but this book does sound interesting.