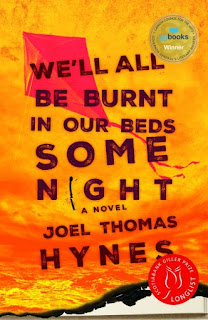 If I spied Johnny Keough coming toward me along a dark street, I'd probably be tempted to cross to the other side.  He's had a tough life and isn't about to take crap from anyone.  As I was reading the opening chapters of this book, I questioned whether I would finish.  It's not the type of story I generally read.  I decided that I would push myself out of my comfort zone and keep reading.  I needed to know why this book was awarded the Governor General's prize in 2017.

Johnny is hard to like.  He talks tough and acts tough.  Inside, he does have a soft spot which is why he rescued an elderly couple from their burning home.  I kept reading and looking for him to change his life around.  He just couldn't do it for long.  It seemed that every time he was doing well, that life would extract a very stiff price, almost as a penalty.

Author Joel Thomas Hynes slowly reveals nuggets of information regarding Johnny's past.  Most were events with fairly grim outcomes.  His best days always involved his dear cousin Mikey.  Unfortunately for Johnny, Mikey committed suicide weeks before the start of this novel.

As Johnny continued on his quest that was taking him across the country, his luck seemed on a downward spiral.  As he sunk lower, an assortment of well meaning people tried to help him, but he wouldn't/couldn't let them.  His past lead him to know that he couldn't trust people.  As unlikeable as Johnny was, I found that by the last few chapters, the tears were pouring down my cheeks and I felt an over whelming need to mourn for the lost possibilities of the life that Johnny could have lived if only some one had loved and cared for him.  I am so glad that I did continue reading.  It has made me question the lives of others and how little control they could have on the events that control their life.

#IndigoEmployee
Posted by Heather at 19:21

I know the feeling when you push yourself to finish a book despite not being totally gone on it!

Hi Heather, just found your blog. I read a lot and feel badly I have not read Joel's book, being a fellow Newfoundlander and all. But like you, I didn't think the subject matter was to my tastes. Thanks to your review I will give this a try.
Also happy you have your quilting mojo back!