Midnight Reynolds and the Agency of Spectral Protection by Catherine Holt 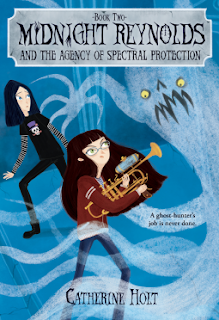 Midnight and Tabitha are a team.  Even though they are only twelve, for the past six months they have been working with the Agency of Spectral Protection, ASP, to release trapped spectral energy.  After witnessing a spectacular robbery, ASP requests the two to investigate the situation.  They soon realize that this case is far beyond what was covered in their training.    They forge ahead none the less.

This is a fun middle school story.  It involves two friends who are trying to stay under the radar at school and home when they are carrying out work for ASP.  Both use different approaches to keeping life and work separated and now they have added dating into the ix.  Midnight and Tabitha appear quite different, they they understand each other and work together well.  They have turned their differences into assets. Did I mention the vikings and ray gun.

I enjoyed this story, but wish I had read Midnight Reynolds and the Spectral Transformer, the first book in the series, before hand.

I received and advanced reader copy of this book from Albert Whitman and Company and Netgalley in exchange for an honest review.