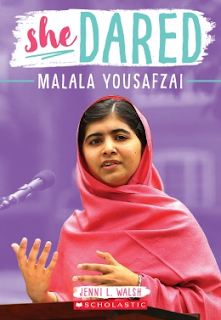 Excellent telling of the story of Malala Yousafzai.

When her education became threatened by the Taliban, eleven year old Malala began speaking out in favour of education for girls and boys.  It was their best weapon against poverty and ignorance.  A few years later, the Taliban attempted to kill her.  She survived.  Though he recovery was difficult she did manage to continue her education  Most importantly, she continued to speak out in support of education  for all children.

I was quite surprised by how much I learned from this book. I knew nothing of Malala's life before she was shot. At that time she was already and impressive young women

This book was written with middle school readers in mind, though parents will also learn much about this young woman as well.  It is written in language suitable for young readers and the situations are explained in as simple terms as possible.  I hope that Scholastic continues with further titles in this series.

I received and advance reader copy of this book from Indigo Books & Music Inc., in exchange for an honest review.

#IndigoEmployee
Posted by Heather at 16:23 No comments: