The Birds that Stay by Ann Lambert 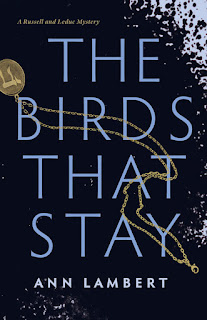 This is a wonderful mystery.  The plot is complex and very well crafted.  It had me veering along the wrong thought path more than a few times.

Reclusive Madame Newman was found dead outside her home in a small rural community north of Montreal.  It was such a bucolic area, that even the responding police officers did not imagine it being a case of murder.  Chief inspector Romeo Leduc did not see it that way at all.  Neighbour Marie Russell passed by the scene.  She was shocked that such violence could occur so close by.  She dismissed it until her elderly mother identified that same neighbour.  This perked her attention.

The cast of character in the story is superb.  From the imperfect Chief Inspector Leduc, to his old school chum Ti-Coune, who seemed to have spent much of his life on the other side of the law. Marie Russell is a professor at a local college and was writing a children's nature book.  Good thing that she never grew out of her enquiring mind.  As this is the start of a series, I suspect these are three of the characters that will appear again.  they are the three that I enjoyed the most.

I want to tell you more about this engaging story, but then that would be telling you secrets and plot lines and I don't want to spoil any of your reading fun.

If you have enjoyed novels by Giles Blunt and Louise Penny, you are sure to enjoy The Birds That Stay.


I received and advanced reader copy of this book from Second Story Press and from Edelweiss in exchange for an honest review.

#IndigoEmployee
Posted by Heather at 19:31