The Wolf in the Whale by Jordanna Max Bradsky 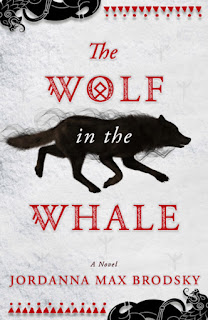 Life in the arctic is harsh no matter the time period. This story is set approximately 1000 AD.  The main characters are the second or third  generation of Inuk that have migrated eastward from the west coastal areas.  Their physical survival is dependent on building shelter and catching animals, both land and sea, for food and fur.  Their spiritual health is overseen by the angakkug (shaman).  This might sound a bit like a National Geographic book, but far from it.

Omat is a newborn at the beginning of the story and we follow them through the next 2 decades.  While physically born a girl, she is named for her deceased father and is raised as a boy.  This  is an accepted practise at that time.  Their grandfather, Ataata is the angakkug.  He seeks knowledge and guidance from their gods.  Within their community they also have a complex set of rules that dictates what is allowed and what isn't.  For example, women aren't allowed to hunt, but since Omat is viewed as a boy, they learn to hunt.


Up to this point, the story is a bit slow as there is much to learn about the families and their way of life. As Omat gets older and becomes apprentice to the angakkug, some in the community begin to object.  This is where the story really got going for me.  I was finding it harder to put the book down.

Omat is a boy and wishes to keep living that way.  They may be smaller than some of the other hunters, but they have great skills and keep the family fed. They struggle as they mature physically and that helps to push the plot through to the end.

I would have thought that by living and growing in a very small community, that all would have accepted Omat as they were, having seen their skills and commitment to the community.  But there is always at least one person who has to stir things up and cause trouble.  Have we as humans not learned anything in the last thousand years.

The author did an excellent job of researching and conveying details of the inuk daily life.  From the building of the igloo, hunting the seals and other animals and then preparing the meats and skins.  This was all worked seamlessly into the story that I didn't realized how much I was learning as I read.

I don't want to give away any plot points, so I will just say that this family group does not stay isolated for long.  That brings in a whole new bunch of benefits and challenges.

I loved this book.  I felt as though I had been drawn into Omat's extended family.  I began to care about the success of their hunts and what they would learn on their 'spirit quest'.  As much as I didn't want this book to end, I could wait to find out how Omat would deal with the issues facing them.

I received and advanced reader copy of this book from Redhook and from Netgalley in exchange for an honest review.

Despite this being what sounds like a slow burner I'm glad it eventually worked for you. Love the cover but I'm not sure that its one for me ... perhaps if I were to see it in the library but not to buy.