The Bookwoman of Troublesome Creek by Kim Michele Richardson 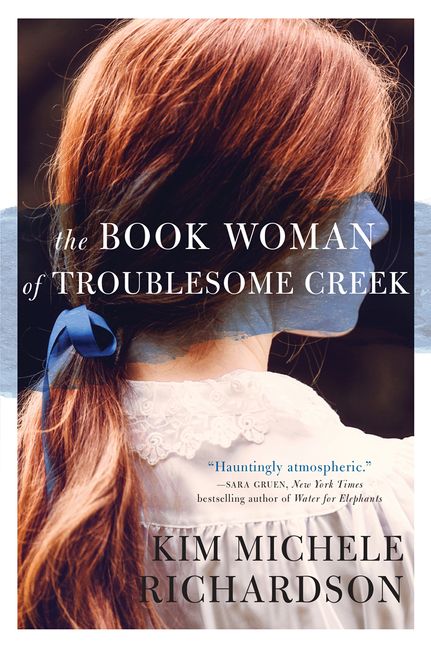 I was blown away by this book, it was amazing.

In 1936, American President Roosevelt started the Pack Horse Library project to bring books to people living in remote places.  One of these places was in Eastern Kentucky in the watershed of Troublesome Creek.

Cussy Carter wanted to one of those women.  She wanted to bring reading to her neighbours.  While carrying out this job she faced many difficulties: being a woman riding out alone, visiting people she didn't know and mostly, her colour.  Cussy was blue. She was one of the rare blue people of Kentucky, possibly one of the last.

I like the way author Kim Michele Richardson presented Cussy's clients.  Some welcomed her with open arms, hugging her and thanking her for the books, others greeted her at a distance yet were cordial, some were outright distrustful and wouldn't come near her.  It clearly showed the joys and challenges of the job.

This book is a microcosm study of racism.  Cussy's colour was held against her more so that of the brown/black people.  Much was blamed on her and her people such as bad luck.  Many blue people were killed just because of the colour of their skin.  Even when science showed that the blue colouring was a genetic condition that was treatable, they were still shunned.

We all accept today that literacy opens doors to jobs and increased income.  During the time in which this book was set, schools were not available to all in such rural areas.  The book women also helped to teach their clients to read, which brought them hope for better lives.

For those residents with a distrust of the government, the book women were a positive message that their president cared.

I learned so much reading this book.  There was a lot of history mixed in with the fiction which made for an amazing read.  It also made it hard for me to keep in mind that Cussy was a fictional character and not a real life hero.


I received an advance copy of this book from Indigo Books & Music Inc., and Harper Collins Canada in exchange for an honest review.

Both the condition that afflicted Cussy and the Pack Horse Library venture were new subjects for me. I was fascinated throughout this read.

There is so much about this book that really appeals to me, not least of which is Cussy. I'll be certain to keep a look out for this.

As soon as I read read about this book, I had to research whether the blue people of Kentucky were real, then I looked up the horse libraries. Was so excited when I realized they were real.

I have not heard of blue people - am off to look it up! xx